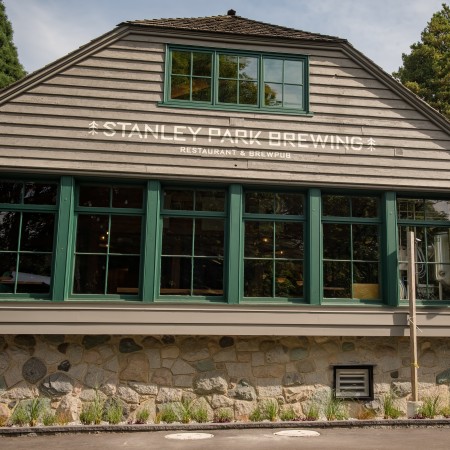 VANCOUVER, BC – Almost three years after it was first announced, Stanley Park Brewing is just days away from opening a flagship restaurant and brewery in its namesake city park in downtown Vancouver.

The Stanley Park Brewing Restaurant & Brewpub is located in a historic building in Stanley Park that was built in the 1920s as a pavilion for golfers and tennis players, and was most recently in operation as The Fish House, a restaurant that closed in 2015.

Set to open on Monday July 29th, the family-friendly restaurant will operate in partnership with the Joseph Richard Group, and includes seating for 140 indoors, 50 on an outdoor deck, and 40 on a patio.

“We are thrilled to be introducing our new Restaurant & Brewpub into Stanley Park,” said Doug Devlin, General Manager of Stanley Park Brewing, in a statement. “Our concept celebrates the spirit of the park and will offer with high-quality good food and beverage options. We’re hoping that’ll allow us to attract new visitors to the park, all while being consistent with the integrity and lifestyle of the park and the historic landmark.”

Stanley Park Brewing is a division of Labatt Breweries/AB InBev, and will continue to produce its core and seasonal brands at the Turning Point Brewing facility in New Westminster for retail and licensee distribution.