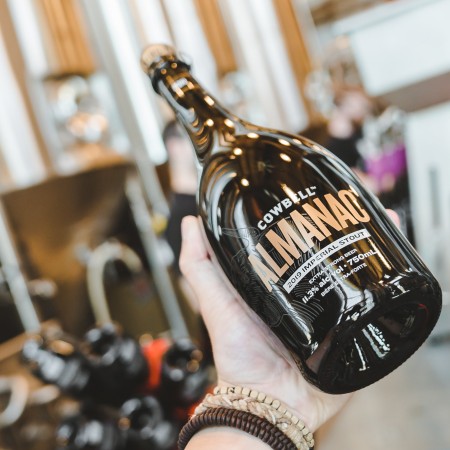 BLYTH, ON – Cowbell Brewing has announced details of a special limited edition beer that will soon be released to mark the brewery’s 2nd anniversary.

Almanac 2019 Imperial Stout was brewed with eight specialty malts in four partial batches over two days to ensure we collected only the richest and most flavourful wort for fermentation. Twelve months later, the resulting beer shows off rich, full-bodied chocolate and espresso sensations. Notes of vanilla and brandy are aromatic and lean back into fudge and roasted coffee beans. It is bottle conditioned with delicate carbonation, creating a creamy and lush body, with a silky chocolate finish.

Almanac 2019 follows in the footsteps of Almanac 2018 Barley Wine, which was brewed on Cowbell’s opening day – August 5th, 2017 – and released for last year’s 1st anniversary. A special barrel-aged edition of Almanac 2018 was also released last December.

Almanac 2019 will be released on Saturday August 3rd in a limited run of 750 ml and 1.5 litre bottles available exclusively at Cowbell Brewing.