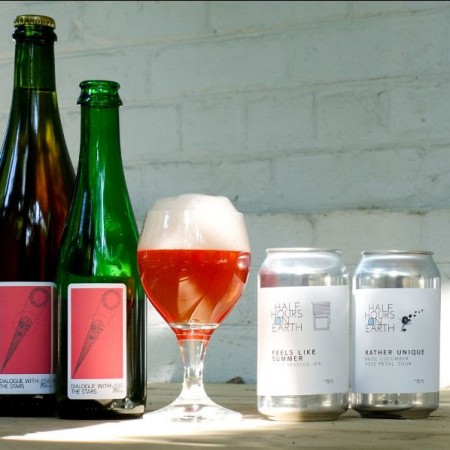 SEAFORTH, ON – Half Hours on Earth has announced the release of three new beers this week.

Rather Unique (5.2% abv) is a sour ale brewed with basil, cucumber, and rose petals, a “combination of flavours [that] collectively enhances one another, better than each on their own.”

Feels Like Summer (4.8% abv) is a sour session IPA with vanilla and hopped with Azacca, Simcoe & Idaho 7, described as “dry, tropical, sour, citrus, soft vanilla, an all around thirst quencher perfect for the summer heat.”

Dialogue With The Stars (6.5% abv) is an oak aged blended farmhouse ale aged on second use black currants and Montmorency cherries with a more detailed description:

You may remember beers like Alpha Orionis & Into the Groovey, with their massive in-your-face fruit flavours due to the copious amount of fruit they rest on. After we rack off the fruit, there’s still plenty of flavour in those once referemented fruit. So we found some choice barrels displaying bright acidity and modest funk, and topped them off back onto the fruit for several more months of ageing. We then blended these together for what is now Dialogue with the Stars. A jammy sour beer with still prevalent cherry & black currant character, but balanced and subdued to allow the base beer to continue to shine.

Rather Unique and Feels Like Summer have been released in 355 ml cans, while Dialogue With The Stars is packaged in both 375 ml and 750 ml bottles. All three beers are available now in the Half Hours on Earth brewery store and online shop while supplies last.