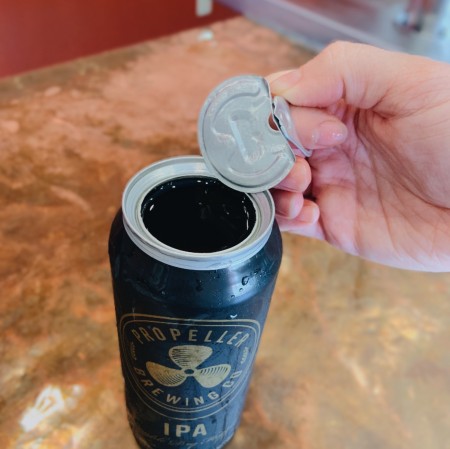 HALIFAX, NS – Propeller Brewing has announced the release of a variant on its classic IPA in a distinctive can that is new to the Nova Scotia market.

Double Dry Hopped IPA (6.5% abv) has been dry-hopped with Mosaic and Simcoe, resulting in a beer that is “tropical and delicious, bright and crisp.”

The beer comes packaged in a 473 ml can with a 360 End which allows the entire lid to be peeled off, turning the can into a cup and releasing the full hop aroma.

Propeller DDH IPA in the 360 End cans is available now at both Propeller retail stores, and will soon be at private beer stores in Halifax and NSLC’s The Port location. A launch event featuring a cask of DDH IPA with more hops added will be taking place today (August 2nd) at Propeller’s Halifax taproom starting at 5:00 PM.