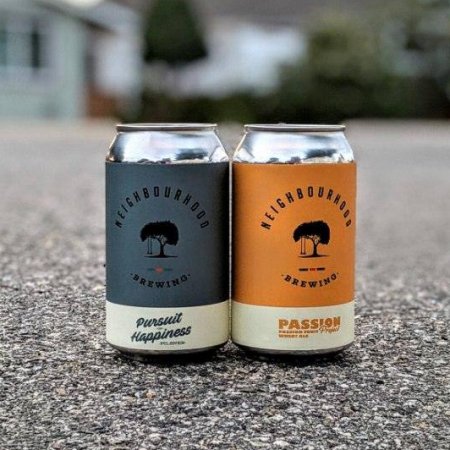 PENTICTON, BC – A brewery currently in pre-construction phase in the Okanagan Valley has announced the release of two beers that have been produced with the help of another local brewery.

Neighbourhood Brewing is being established in Penticton by the founders of Port Moody’s Yellow Dog Brewing and several other partners, with the intention to replicate the core model of the original company, i.e. “a family run brewery, with strong morals and values, putting out high quality beer for the community to enjoy.”

The two debut beers from Neighbourhood – Pursuit Of Happiness Pilsner (5% abv, 33 IBU) and Passion Project Passionfruit Wheat Ale (5.3% abv, 10 IBU) – have been brewed under contract at Bad Tattoo Brewing, just around the corner from the new brewery’s eventual home at 187 Westminster Ave.

Both beers are available now in cans at select retailers and on tap at select bars and pubs in Penticton, Kelowna, and other local communities. For more details, see the Neighbourhood Brewing Facebook page.