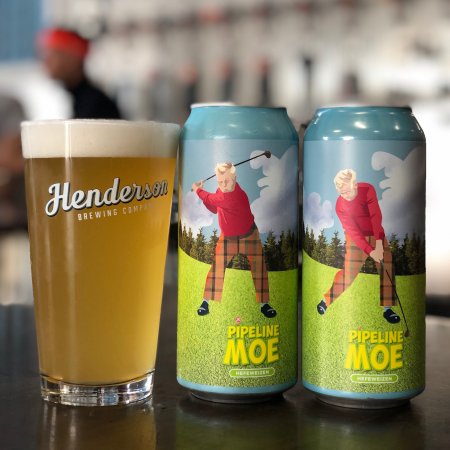 TORONTO, ON – Henderson Brewing has announced details of the August 2019 releases in its monthly limited edition Ides Series.

Pipeline Moe Hefeweizen (5% abv) was inspired by “Pipeline” Moe Norman, a self-taught professional golfer from Kitchener who was known for a unique swing which is illustrated on the label. It’s described as follows:

Pipeline Moe Hefeweizen is true to form as a classic German Wheat beer. It has aromas of banana and clove, with phenolic flavours of bubblegum & clove, and only a touch of sweetness. It is a pale, spritzy, spicy wheat beer, ideal for hot summer weather.

Pipeline Moe Hefeweizen will be released tomorrow (Friday August 16th) at Henderson, with a launch party at 6:00 PM featuring samples of the beer, free food from The Gin Mill, and free Henderson branded golf balls while supplies last.

Following the launch, Pipeline Moe Hefeweizen will be available on draught and in 473 ml cans at the Henderson taproom and retail store.