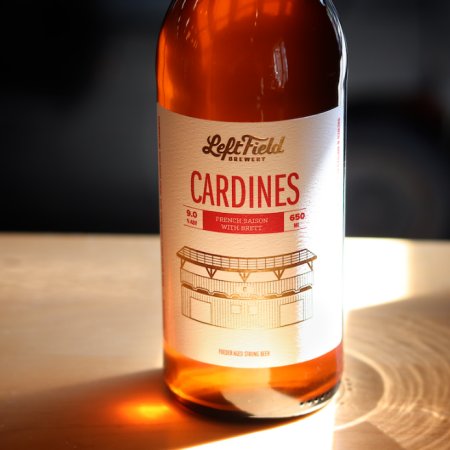 TORONTO, ON – Left Field Brewery has announced the release of the latest beer to be fermented in its oak foeders.

Cardines (9% abv) is French saison aged on Brettanomyces in oak foeders for 7 months, resulting in “a crisp, effervescent saison, popping with honeysuckle aromatics and an array of fruity, oaky flavours.”

As with Wahconah, the brewery’s first foeder-aged beer, Cardines is named after one of North America’s oldest ballparks:

Cardines (pronounced Car-deen) Field, is a stadium located in the quaint town of Newport, Rhode Island. Boasting a stone facade and classic wooden bleachers, Cardines was built in the same era as major league parks like Fenway and Yankee Stadium, and is believed to be one of the oldest baseball parks in North America. Having hosted renowned legends such as Yogi Berra and Phil Rizzuto, who played here while stationed in Newport with the Navy during World War II, this small jewel of a park, is now home to the collegiate Newport Gulls, who continue to draw in the crowds who enjoy watching the game in the stadium’s original intimate stands.

Cardines is available now in 650 ml bottles at at the Left Field retail store and online shop.