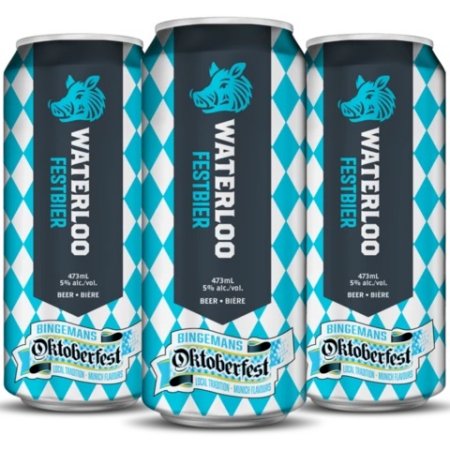 KITCHENER, ON – Waterloo Brewing has announced the third annual release of its seasonal Oktoberfest beer.

Waterloo Festbier (5% abv, 18 IBU) is a Munich-style lager as follows:

Made with the finest German malt and hops, our Festbier is faithful to Oktoberfest tradition: full-bodied and malty, with a bready aroma and mild bitterness.

As in previous years, Waterloo Festbier will be a featured beer at the Bingemans Oktoberfest festhalle which will be open on October 11th-12th and 18th-19th, 2019, during Kitchener-Waterloo Oktoberfest.

Waterloo Festbier will also be available in 473 ml cans at the Waterloo Brewery retail store and select LCBO locations in the Kitchener-Waterloo area for a limited time.