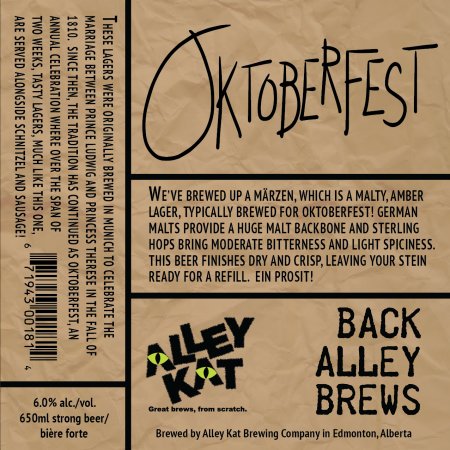 EDMONTON, AB – Alley Kat Brewing has announced details of the latest release in the Back Alley Brews series of limited edition one-off beers.

Oktoberfest (6% abv, 26 IBU) is a traditional Märzen, and described as follows:

German malts provide a huge malt backbone and sterling hops bring moderate bitterness and light spiciness. Aromas of toffee and toast lead into flavours of caramel and bready sweetness and a dry, crisp finish, leaving your stein ready for a refill.

Oktoberfest will be released tomorrow (September 12th), and will be available in 650 ml bottles at Alley Kat and select retail stores, restaurants, and bar in Alberta while supplies last.