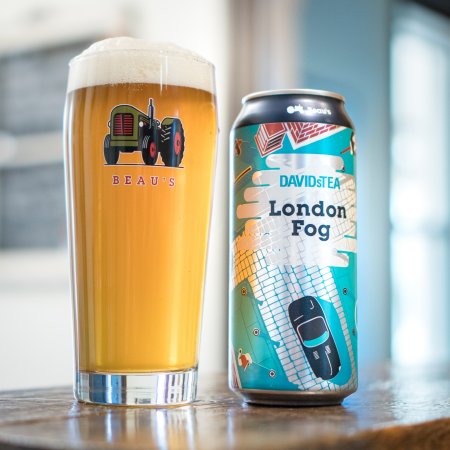 VANKLEEK HILL, ON – Beau’s Brewing and DAVIDsTEA have announced the release of a new collaboration that combines the expertise of both companies to create a unique beverage.

London Fog (5.3% abv) is a golden ale brewed with lactose and vanilla, and infused with Organic Cream of Earl Grey tea, resulting in “the creamy, comforting experience of an Earl Grey latte, in a certified organic craft beer.”

The beer is further described as follows:

Earl Grey tea is known for containing oil of bergamot, a distinctly fragrant citrus fruit. To brew DAVIDsTEA London Fog, Organic Cream of Earl Grey tea goes into the kettle, along with organic Jarrylo hops that echo the bergamot in the tea. Milk sugar and oats in the brew add a touch of sweetness and body, and vanilla flavour adds the finishing touch to this smooth, full flavoured ale.