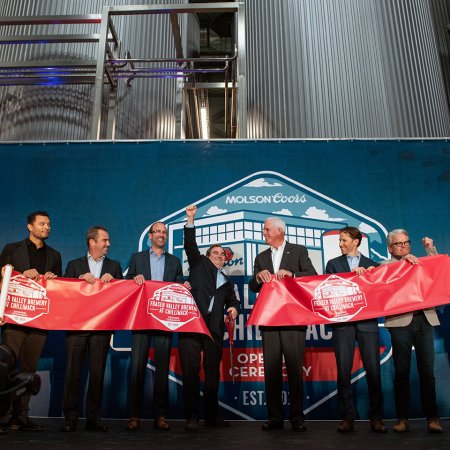 CHILLIWACK, BC – Three years after it was announced, Molson Coors Canada has opened its new brewing facility in Chilliwack, replacing its Vancouver plant that was sold in 2015.

Located on a 36-acre site bordered by Kerr Avenue, Vedder Road and the Trans-Canada Highway, the $300 million facility will operate with approximately 100 employees, and is described as “the newest and most modern brewery in Molson Coors Brewing Company’s world-wide network of 29 breweries.”

The company announcement provides more details on the environmental friendliness of the factory, including the following details:

The brewery will set a new standard for sustainability. Compared to the recently closed Vancouver brewery, the new modern Fraser Valley Brewery at Chilliwack will reduce energy use by 20% and water by 40%. The Chilliwack brewery will be equipped with improved technologies that will deliver on reduced energy consumption, CO2 emissions and carbon footprint, such as optimized equipment layouts to reduce beer loss and waste, and a state-of-the-art CO2 recovery system.

The brewery also features a woven artwork by local artist Freida George that pays tribute to the heritage of the Stó:lō people who are native to the area.