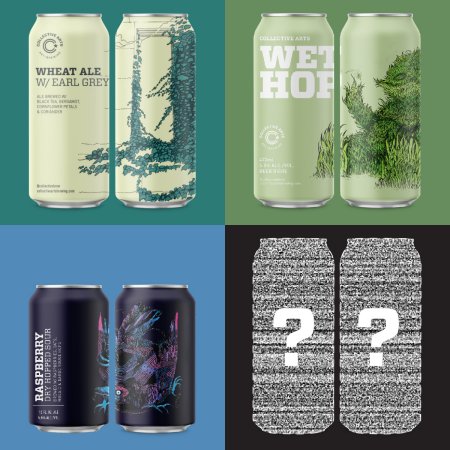 HAMILTON, ON – Collective Arts Brewing has announced details of four beers that are set for release this fall.

Wheat Beer with Earl Grey Tea and Coriander (5% abv) is a new seasonal described as follows:

Belgian Wits are traditionally brewed with orange peel and coriander, so to add a flavourful and modern twist on a classic we enlisted the help of our pals at Genuine Tea. We replaced the orange peel with another classic – Earl Grey. Made with the oil of Bergamot Orange citrus, the tea gives this beer a unique flavour while honouring the classic beer style.

Wet Hop Wheat Ale (5% abv) is back for another year:

Celebrate the harvest with the freshest hops around! Picked within hours of brewing, local Ontario Chinook hops deliver a huge nose of juicy fruit and grassy mango. A mix of Pilsner and pale wheat give a light, straw-like colour that drinks extremely smooth with a bready malt finish.

Not only did we throw a mountain of raspberries into this brew, we backed them up with a generous amount of berry forward Mosaic and Barbe Rouge hops! The result is a refreshingly tart, fruit forward sour ale.

Finally, a new beer will be added to the Collective Arts core line-up, but everything about it including name, style, and tasting notes are yet to be revealed.

Release dates and distribution details for the four beers will be announced soon.