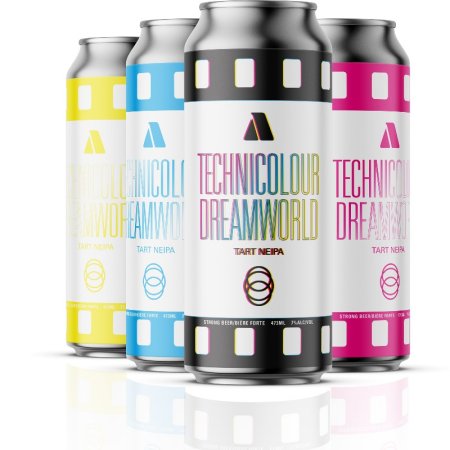 Technicolour Dreamworld Tart NEIPA (7% abv) was brewed at Cabin Brewing in tandem with The Establishment Brewing Company, and is described as follows:

Our two head wizards of wort have layered a kaleidoscope of exotic hops – Sultana, HBC-472, Cashmere and Ekuanot – over a solid backbone of Alberta-grown pilsner malt, with layers upon layers of pillowy oats and wheat to provide a sumptuous body. With some crisp acidity added into the mix, this tart New England IPA is brought to life.

Technicolour Dreamworld will go on sale today (September 25th) at Cabin, where it will be available by the glass, growler fills (today only), and in 4-packs of cans with each containing “three coloured cans – magenta, yellow and cyan – which are the overlaid on the fourth black and white can in much the same way old colour films were produced.” A release party will run from 3:00 to 9:00 PM, with DJ Hezloop playing funk vinyl starting at 4:00 PM.