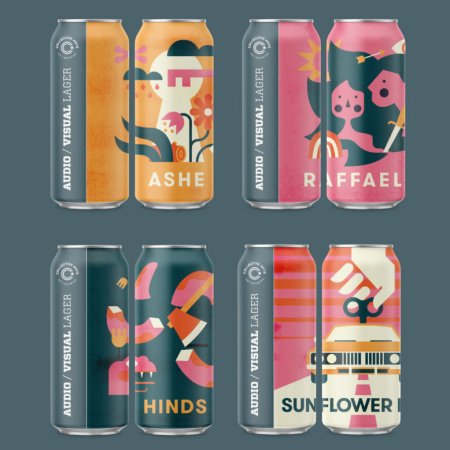 HAMILTON, ON – Collective Arts Brewing has revealed details of a new year-round brand that was teased in an earlier announcement about release plans for fall.

Audio/Visual Lager (4.9% abv) is a beer that the brewery says “embodies our love for music and our passion to push the boundaries for emerging talent,” an intent that is further described as follows:

This collaborative series celebrates the intersection of art, music and beer, featuring a record label, four bands and one visual artist. Every three months, the bands, the record label and the artist will switch, making room for continued discovery of emerging music of all genres.

For its debut release, Audio/Visual puts the spotlight on the Mom+Pop Music label and its bands Ashe, Hinds, Sunflower Bean, and Raffaela, with cans designed by Mikey Lavi, a Canadian artist currently living in Burlington, Vermont.

As for the beer itself, it has the following notes:

Audio/Visual is brewed with pilsner malt and brown rice and cold aged for 4 weeks for the most refreshingly clean, and crisp finish possible. We use Wai-iti hops for fresh notes of lime and mandarin citrus, rounding out this traditional style into a benchmark lager.

Audio/Visual Lager is available now at Collective Arts, and soon at LCBO stores in Ontario, with distribution to other markets in Canada and the US to follow later in October.