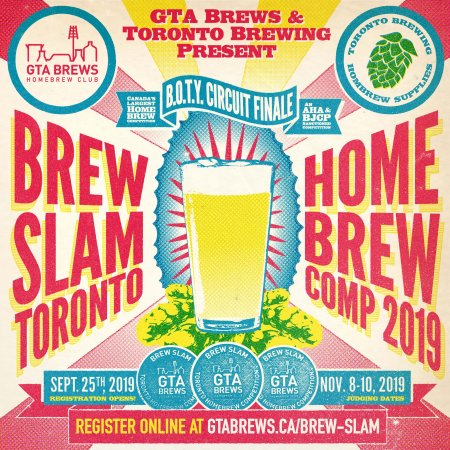 Brew Slam 2019 is Canada’s largest homebrew contest, and is open to homebrewers from across the country, with entries to be evaluated by a panel of judges based on BJCP style guidelines. Thousands of dollars worth of prizes will be up for grabs, and the awards will also be counted towards the national Brewer of the Year standings.

Registration can be made online between September 25th and November 2nd, and all liquids must be dropped off or delivered by the end of the registration period. This year’s competition will be limited to 850 total entries, with a limit of 2 entries per person until October 2nd, raising to 6 per person as of October 3rd.

Judging will take place November 8th to 10th at Amsterdam Brewery in Toronto, with beer and brewing author John Palmer in attendance for the judging. Winners will be announced on November 23rd during an awards ceremony at Junction Craft Brewing.

For full entry details and other information, see the Brew Slam website.