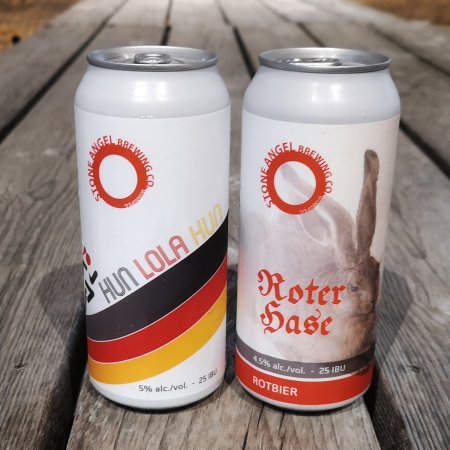 Hun Lola Hun (5% abv, 25 IBU) is a Köttbusser Ale, which is described as follows:

Named after the German town of Kötbuss, southeast of Berlin, the Köttbusser is a lagered honey wheat ale with a golden hue, subtle spice complexity and a dry finish similar to an Altbeer. When the introduction of Germany’s Reinheitsgebot beer purity law restricted the definition of beer to include only barley, hops, and water, this beer style became illegal to brew commercially due to its use of wheat, honey and molasses and thus the beer fell into obscurity.

Roter Hase (4.5% abv, 25 IBU) – German for Red Hare – is a Nürnberg style rotbier (red beer) named in honour of a 1502 painting by Nürnberg artist Albrecht Dürer. It was originally available for several months last autumn, and is now back for another run.

Both beers are available now on tap and in cans at Stone Angel.