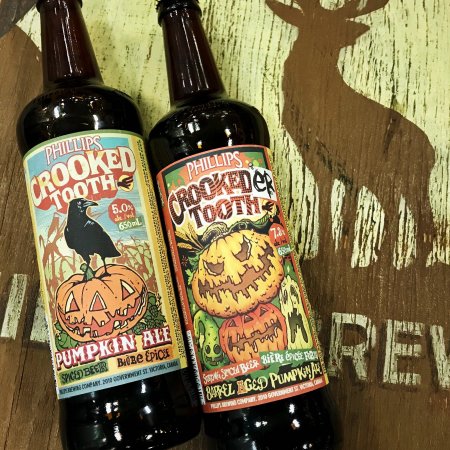 VICTORIA, BC – Phillips Brewing has announced the annual return of a pair of popular Hallowe’en-themed seasonal beers.

Crooked Tooth (5% abv) has been an annual tradition for Phillips since 2007, and is described as follows:

This Phillips seasonal classic combines fresh pumpkin, ginger, cinnamon and nutmeg with a full-bodied ale. It’s a witches brew packed full of fall harvest flavour that, like many ghostly spirits of the season, has a tendency to disappear quickly.

Crookeder Tooth (7.3% abv) is a stronger variant on the original that has the following notes:

The big barrel-aged brother to Crooked Tooth, this pumpkin ale is king fo the patch. “Crookeder” brings a delicious vanilla bourbon punch to help light up that smile. Pairs well with tricks or treats of all kinds.

Crooked Tooth and Crookeder Tooth will both be available at Phillips and select private liquor stores in BC for a limited time.