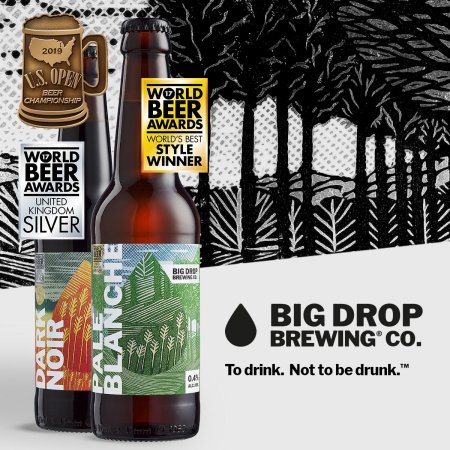 TORONTO, ON – UK-based non-alcoholic beer company Big Drop Brewing has announced that two of its award-winning brands are now available in Ontario.

Founded in late 2016 by Rob Fink and James Kindred, Big Drop has become a leading craft producer of non-alcoholic beers (0.5% abv or less). Its beers are brewed at several UK facilities under contract, using unique techniques and recipes developed by brewer Johnny Clayton that allow for them to be produced without having to water down the liquid or extract alcohol to reach the non-alcoholic threshold.

In the three years since launching, Big Drop’s beers have won awards in multiple beer competitions – some of them against full-strength competitors – and distribution has expanded to several European countries.

For its Ontario debut, Big Drop has brought two of its brands into the province. Pale Blanche (0.4% abv) – a renamed version of its core Pale Ale – is described as “a crispy and zesty beer packed full of flavour from citrus-heavy hops with a twist of fresh lime and hints of pine and honey on the nose.” Dark Noir (0.4%) – the Ontario label for its flagship Stout – is “a dark, rich and indulgent beer with notes of coffee, cocoa nibs and a lingering hint of sweet vanilla.”

Both beers are available now at select LCBO locations throughout Ontario, retailing for $2.75 per 330 ml bottle.