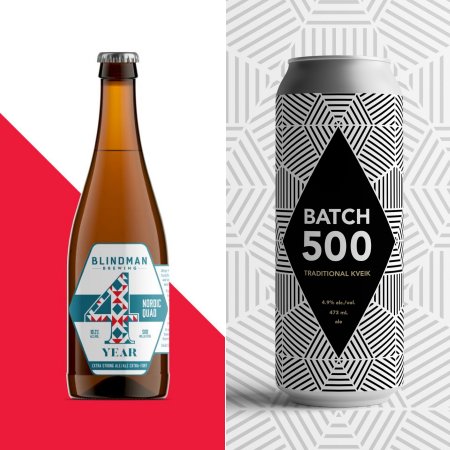 LACOMBE, AB – Blindman Brewing has announced the release of new beers to mark both the brewery’s 4th anniversary and the brewing of its 500th batch.

Because it’s our anniversary we hope you’ll indulge us as we go on a journey across the Atlantic and blend two styles of beer that may never have been blended before – the Norwegian Hornindal kveik and the Belgian quadruple. The dark malt flavours of the quad blend well with the fruity esters of the hot (like, very hot) fermenting kveik yeast which should mellow out the higher alcohol. It should be as rich as the history of those two great beer styles and as vast as the ocean that separates them from us.

Batch 500 Traditional Kveik (4.9% abv) is brewed with the same kveik yeast as Year 4, but is a very different beer otherwise:

Farmhouse ales are some of the most complex and fruitful styles of beer in the world. Norwegian brewers have been practicing and perfecting styles of beer based on unique yeasts colloquially called ‘kveiks’. We brew this one traditionally – with the brewing water filtered over freshcut juniper bows, using barley, oats and rye and with a long rolling boil. It fermented fast and hot and is best enjoyed slow and cool.