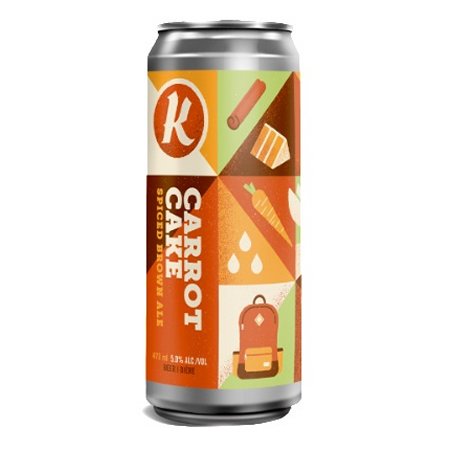 OTTAWA, ON – Kichesippi Beer Co. has announced the return of a fall seasonal that offers a distinctive alternative to the pumpkin spice beers that are always in demand at this time of year.

Carrot Cake Spiced Brown Ale (5% abv, 33 IBU) is a beer intended to emulate the aroma and flavour of its namesake dessert, with brewery founder Paul Meek providing the following back story:

My son has known for a long time that I absolutely love carrot cake. When he was younger, for my birthday, Alexander rode his bicycle to the local grocery store, bought a carrot cake for me and then placed it gently in his back pack with hopes that it would survive the ride back to our house. The cake was perfectly intact and stands to this day as one of my favourite family memories.

Carrot Cake Spiced Brown Ale will be launched on Thursday October 10th at Kichesippi, where it will be served along with complimentary pieces of carrot cake from Zola’s Restaurant in Bells Corners.