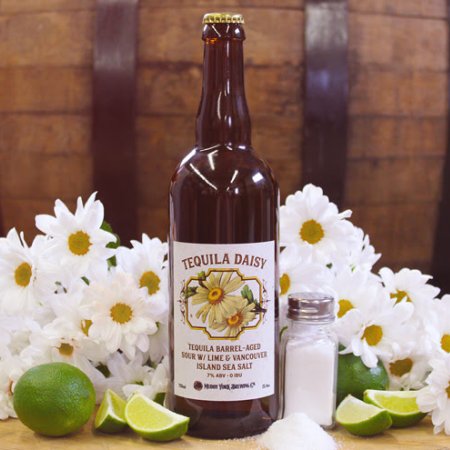 TORONTO, ON – Muddy York Brewing has announced the release of a new limited edition beer inspired by the history of a classic cocktail.

Tequila Daisy (7% abv) is a barrel-aged sour ale with the following description and back story:

Using a neutral lacto-fermented sour as a base for the beer, we then aged it in Tequila barrels; eventually adding lime zest and Vancouver Island Sea Salt to accentuate the tequila flavours. The result is a bright, tart, sour ale that exudes tequila, and tastes very much like a margarita.

We named it Tequila Daisy after a classic cocktail developed in the 1930s, called The Daisy, which featured spirits, citrus juice, and grenadine – served over ice. Gin and Whiskey were most commonly used. That is until some genius bartender in Tijuana made it with tequila, adding lime juice and salt to replicate the traditional tequila shot. This cocktail was eventually re-named Margarita, which is Spanish for Daisy.

Tequila Daisy will be released tomorrow (October 10th) in 750 ml bottles and on tap at Muddy York. Bottles are available for pre-order now via the brewery’s online store.