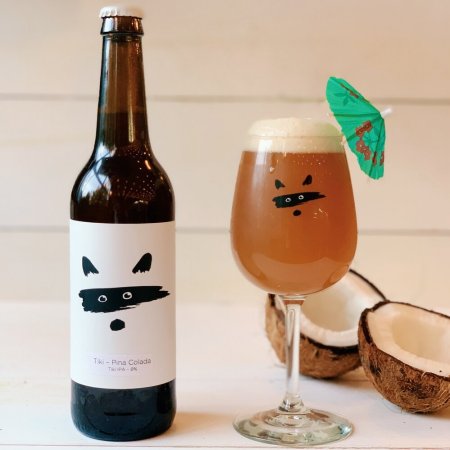 TORONTO, ON – Bandit Brewery has announced the latest in its series of tiki cocktail-inspired beers.

Tiki Piña Colada IPA (8% abv) is inspired by the rum, coconut, and pineapple flavours of the classic Piña Colada, and is described as follows:

A heavy dose of oats and a slight addition of lactose help give the beer its creamy and velvety smooth consistency (nobody wants a watery piña colada). White cane sugar was added at the boil to bring forward some of that Rum-like heat, a result of the fermentation of this type of sugar. Coconut was added initially in the whirlpool, as well as El Dorado hops, known for their intense pineapple notes. The pineapple juice wasn’t added until the dry-hop, with a hefty infusion of Galaxy and Sabro hops. Sabro hops are relatively new to our brewhouse, but they work beautifully in this beer due to their coconut-like sweet aromas. The result is a full-bodied beer that, despite its high ABV, drinks smoothly and finishes with a smooth and sweet taste. Strong notes of pineapple upfront are followed by the sweet coconut aromas from the Sabro hops.

Tiki Piña Colada IPA is available now on tap in the Bandit taproom, and in bottles in the brewery retail shop and online store.