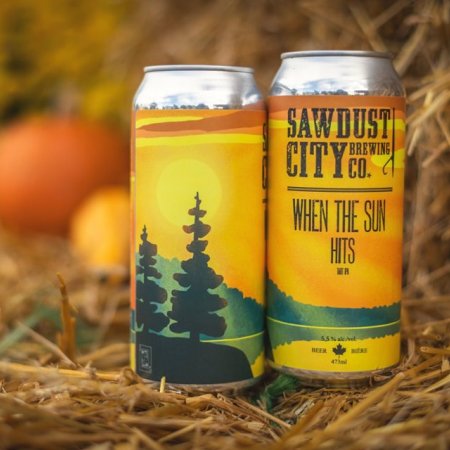 GRAVENHURST, ON – Sawdust City Brewing has announced details for the 43rd of its 52 weekly beer releases for 2019.

When the Sun Hits Tart IPA (5.5% abv, 20 IBU) is named after a song by UK shoegaze group Slowdive, and is described as follows:

This tart IPA combines three loves, sour beers, crushable IPAs, and early 90s shoegazer rock. We started off with a classic Amarillo hop base and added not one, but three new hops; Loral, Palisade and the rare Barbe Rouge. What we finished with is a truly unique brew boasting gentle herbal and floral notes along with flavours of fruity orange citrus and overripe strawberries. It’s lightly tart with a big hop forefront and finishes with a wave of ethereal vocals, distorted guitar and a heap of teenage melancholy.

When The Sun Hits will be released on Thursday, October 24th in 473 ml cans at the Sawdust City retail shop and online store.