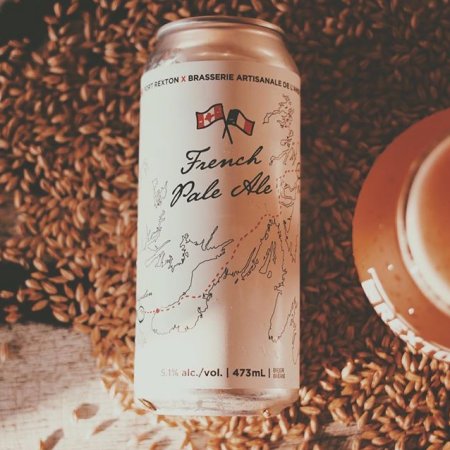 PORT REXTON, NL – Port Rexton Brewing has announced the release of a new collaboration with Brasserie Artisanale de l’Anse of Saint Pierre et Miquelon, the island territory of France located in the Gulf of St. Lawrence near the Grand Banks of Newfoundland.

French Pale Ale (5.1% abv) is believed to be the first collaboration between Canadian and French breweries, and is described as follows:

Supported by Legendary Coasts of Eastern Newfoundland and Tourisme Saint-Pierre et Miquelon, this beer was crafted as a symbol of the spirit of collaboration and partnership between the province of Newfoundland and Labrador and the French archipelago of Saint-Pierre et Miquelon. Featuring French pale, pilsner and biscuit malt and French Strisselspalt, Mistral and Bouclier hops, the French Pale Ale has notes of rose, melon, herb and grass with subtle spicy/floral undertones and lingering bitterness.

The beer will be released today (November 7th) at the Port Rexton Brewing retail store in St. John’s, and tomorrow at the brewery taproom in Port Rexton. A shipment has been been sent to Saint Pierre et Miquelon, and an event to celebrate the partnership will take place in St. John’s on December 9th.