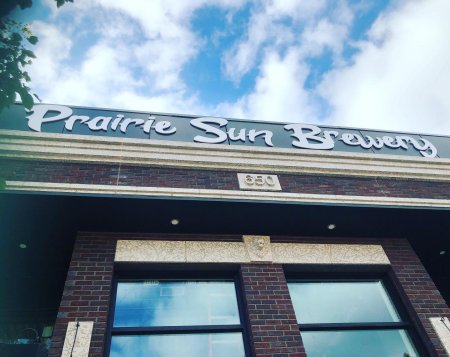 SASKATOON, SK – A year-and-a-half after it was first announced, Prairie Sun Brewery has opened the doors of its new location on Broadway Avenue in Saskatoon.

Built on the former site of Farnham Block, a historic building that was home to much-loved pub and community hub Lydia’s before it was demolished in 2015, the new Prairie Sun had its soft opening last week in advance of an official grand opening this coming weekend.

The new location includes a brewhouse with approximately triple the capacity of the original Prairie Sun Brewery, which was open on Quebec Avenue in Saskatoon from 2013 until earlier this year. Beer is available on tap as well as in cans from the on-site retails hop.

The bar boasts 48 taps that will pour Prairie Sun brands along with guest beers from other Saskatchewan breweries, and the extensive food menu includes sharing and snacking plates, nachos, burgers, deli sandwiches, and other pub favourites. The venue is also being promoted as a family-friendly destination, with games, toys, books, and a 12-and-under food menu.

The new Prairie Sun Brewery is located at 650 Broadway Avenue. Business hours are still in flux, but will be announced via the brewery’s Facebook page once confirmed.