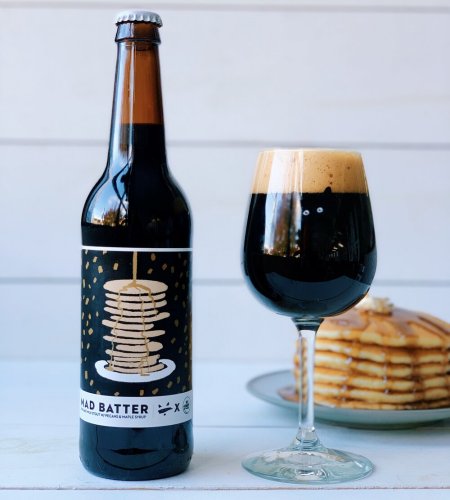 TORONTO, ON – Bandit Brewery has announced the release of a new collaboration with homebrewers Ale Mary Brewing.

Mad Batter Pancake Milk Stout (10% abv) is a sweet Imperial Stout brewed with maple syrup and pecans, and is described as follows:

Imperial Stouts are a favourite style of ours, so we opted for a high ABV version that remains rich and dessert-like to sip on as we head into the colder months. In order to highlight the pancake batter-like flavours, we went very heavy on the biscuit malts, which also helps to tone down the chocolate flavours that are prominent in other of our beers like our Cake Monster Porter. The brew day was a long one (many stuck mashes!), but a really enjoyable experience to be able to work with such talented friends.

Mad Batter will be available at 5:00 PM today (November 13th) on tap in the Bandit taproom, and in bottles in the brewery retail shop and online store.