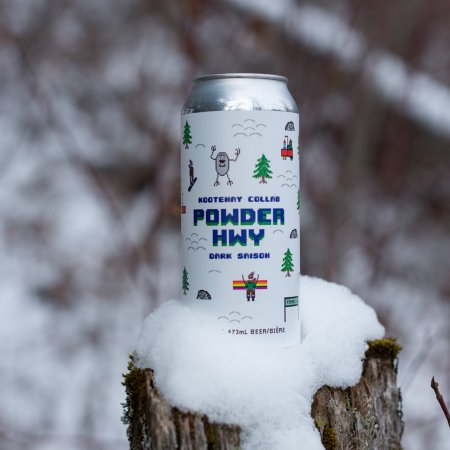 FERNIE, BC – Fernie Brewing has announced the release of a new collaboration with fellow Kootenay region breweries Nelson Brewing, Mt. Begbie Brewing and Whitetooth Brewing to kick off this year’s ski season.

Powder Hwy Dark Saison was brewed with seven specialty malts, including naked oats and smoked malt along with European hops. The addition of cranberries results in a dark and dry Saison with a touch of smoke and a tart kick. The perfect après beer to pair with light Kootenay powder!

Each can of Powder Hwy includes a “text-to-donate” option to raise funds for Avalanche Canada, and the four breweries are selling limited edition Powder Hwy ski socks, with $5 from each pair also going to the charity. In addition, proceeds from all sample flights sold in the Fernie Brewing taproom until December 30th will be donated to Avalanche Canada’s South Rockies Field Team.

Powder Hwy Dark Saison will be officially launched next Thursday November 28th at Fernie Brewing, and will be available in 4-packs of 473 ml cans at beer retailers in British Columbia, as well as on tap at select beer bars.