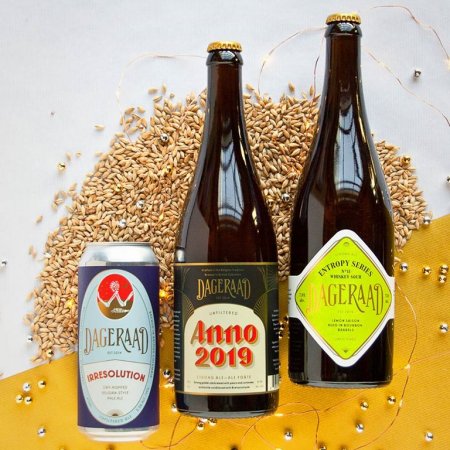 BURNABY, BC – Dageraad Brewing has announced the release of three winter seasonal ales.

Our annual tradition of making a beer with all of our leftover hops is back! Irresolution is different every year, but it’s always designed to brighten the holidays and make you second-guess any rash declarations or promises made in the thrill of the moment on the 31st, or in the stinging morning light on the 1st.

Anno 2019 is the new vintage of a beer released annually to mark the end of the year. It has the following notes:

Anno is a strong, golden ale brewed with Okanagan pears and Indian coriander. The beer is bottle conditioned with Brettanomyces claussenii, a strain of wild yeast that adds funky, fruity flavours and slowly develops over time in the bottle, preserving freshness and adding layers of complexity as the beer ages.

Entropy Series No. 11: Whiskey Sour is the latest in an ongoing series of limited edition barrel-aged beers, and has the following description:

Bright, tart lemon and saison esters stand atop a foundation of deep, rich bourbon, with notes of vanilla and oak. To create a beer evocative of the classic whiskey sour cocktail, we aged The Bright Side tart lemon saison in bourbon barrels for four months.

All three beers will be available starting today (November 28th) in the Dageraad taproom and retail store.