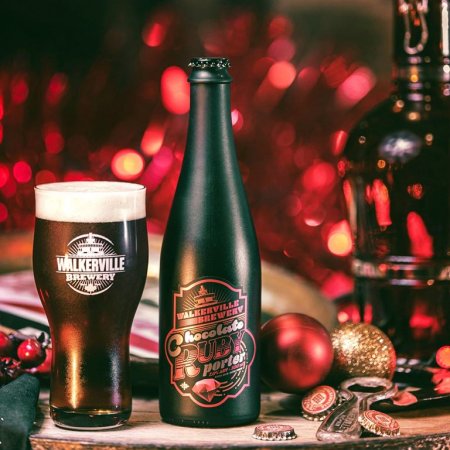 WINDSOR, ON – Walkerville Brewery has announced details of its limited edition release for the 2019 holiday season.

Chocolate Ruby Porter (7% abv) is an English-style porter with the following notes:

Brewed with 100% malted barley and 25lbs of organic cacao beans; this smooth drinking Porter has a dark roast character from the range of malts and luxurious, dark chocolate flavors from the cacao beans. The resulting classic porter is dark in color to the eye, with a delightful ruby hue when viewed under light — true to its name.

Chocolate Ruby Porter will be released tomorrow (November 29th) at 5:00 PM in 500 ml bottles and 2 litre growlers. The launch is also part of Walkerville’s Holiday Extravaganza, a two-night event on Friday and Saturday featuring “a ‘Makers Mini-Market’ filled with great shopping from a hand-selected local businesses and makers, and delicious bites from local restaurants & chefs while enjoying festive live music and entertainment.”

Partial proceeds from the Holiday Extravaganza and holiday beer sales at the brewery will be donated to Hospice of Windsor-Essex County.