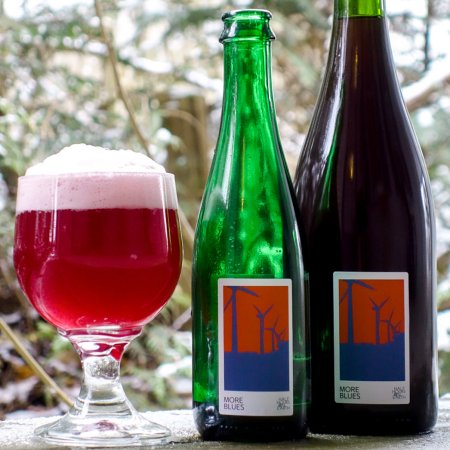 SEAFORTH, ON – Half Hours on Earth has announced the release its final limited edition bottled release for 2019.

More Blues (5% abv) is a sour raw ale aged in oak and then flavoured with chamomile, vanilla, and second use blueberries. It’s described as follows:

A relaxing little sour raw (no-boil) ale fermented with a blend of Arset and Hornindal kveik strains. We then aged the beer in neutral oak barrels inoculated with a mix of Brettanomyces and souring bacteria for nearly a year. After fermentation was complete we then transferred the beer into stainless tanks where it aged for another few months on top of chamomile flowers, vanilla beans, second use blueberries (initially fermented with Blue Thunder), and a Strisselspalt dry-hopping. The result is a soft, full-bodied sour ale with balanced chamomile and blueberry notes, with a hint of the vanilla as the beer warms. Tea-like aromatics with a tart, but quenching, dryness with each sip.

More Blues is available now in 375 ml and 750 ml bottles at the Half Hours on Earth brewery store and online shop while supplies last.