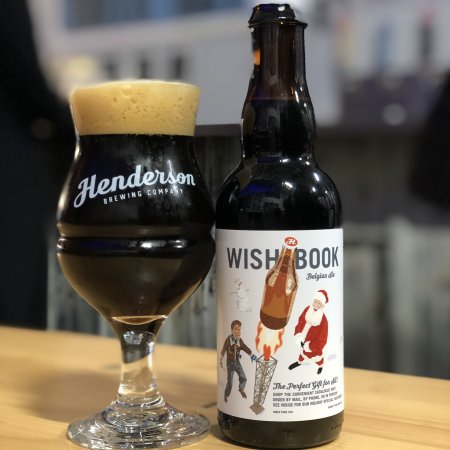 TORONTO, ON – Henderson Brewing has announced details of the December 2019 release in its monthly limited edition Ides Series.

Wishbook Belgian Ale (9.4% abv) is inspired by the days when kids would pore over Christmas catalogues to make their wish lists for Santa, and is described as follows:

WIshbook Belgian Ale is a Spiced Belgian Strong Ale, brewed with cacao nibs, sweet orange peel, and cinnamon. It’s 9.4% ABV with aromas of earthy cocoa and citrus notes, and a roasted, sweet malty flavour. “I’ve been wanting to brew a strong Belgian Ale for a long time, but it had to be at the perfect time of year.” explains Henderson Head Brewer Brian O’Donnell. “This is a warming winter beer with a spicy finish, great for sharing with family and friends at parties – it’s basically Holiday Cheer in a glass.”

The new beer will be released today (December 13th) at Henderson, with a launch party starting at 6:00 PM featuring samples of the beer, free food pairings from The Baker’s Bar, and photos with Santa with donations being accepted for The Stop Community Food Centre.

WIshbook Belgian Ale will be available on draught and in bottles at the Henderson taproom and retail store while supplies last.