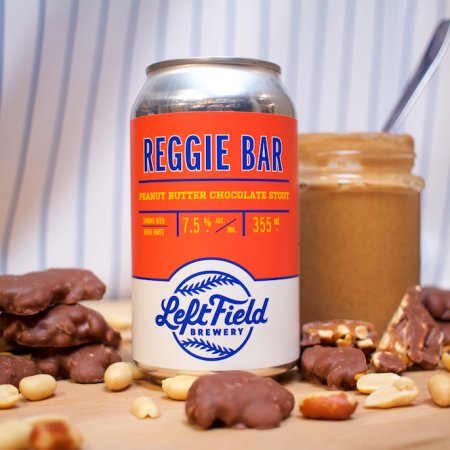 TORONTO, ON – Left Field Brewery has announced the release of a new beer inspired by a candy bar that honoured of one of baseball’s most legendary players.

Reggie Bar Peanut Butter Chocolate Stout (7.5% abv) is named after the Reggie Bar, which has the following back story:

Before signing with the Yankees in 1976, power hitter and one of the greats, Reggie Jackson had said, ‘if I played in New York, they’d [have to] name a candy bar after me,’ and so it was done! At the Yankees home opener that same year, fans were gifted a milk chocolate covered bar with a peanut and caramel center, all wrapped up in packaging that showcased the undeniably confident player who would later bring the Yankees to victory with two back-to-back World Series titles in the 1970s.

The beer features the same flavours as the candy bar, and is described as follows:

Reggie Bar Peanut Butter Chocolate Stout brings the ultimate flavour combo to life in this rich, sticky stout brewed with cocoa nibs and powdered peanut butter. This smooth, flavourful treat brimming with roasted peanuts, milk chocolate and a full, decadent mouthfeel is the perfect way to celebrate and ring in the new decade.

Reggie Bar is available now on tap and in 355 ml cans in the Left Field taproom, with cans also available via the brewery’s online store.