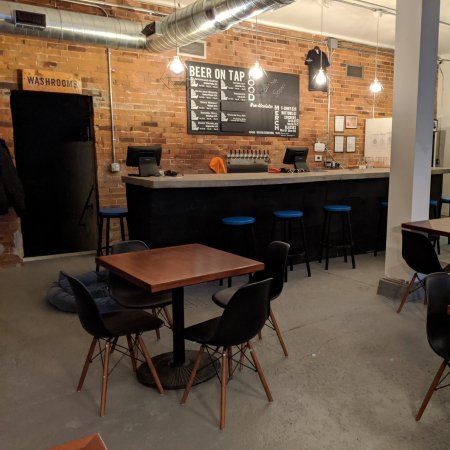 BRACEBRIDGE, ON – Almost a year after it was first announced, a new brewery has opened in Ontario’s Muskoka region in a building that was once home to one of the province’s original craft breweries.

Katalyst Brewing was originally launched in 2016 by Mark Verok and Krystal Perepeluk, who had its flagship Symington Saison brewed under contract while scouting for a bricks-and-mortar space in Toronto. The pair changed their plans in 2018, when they sold the Symington brand to Henderson Brewing, and shifted their location hunt to Muskoka.

That location was soon found in a new retail and residential development in a historic building in downtown Bracebridge that housed Muskoka Brewery from 1994 to 2012. Katalyst occupies 2,500 of the building’s 20,000 square feet, and features a 10 hl brewhouse with six fermenters, and a taproom and retail shop.

Katalyst Brewing is located at 13 Taylor Road in Bracebridge, with winter business hours of 4:00 PM to 10:00 PM on Wednesday and Thursday, and 4:00 PM to 11:00 PM on Friday and Saturday. Beers are currently available by the glass and flight at the bar, and in growlers and howlers to go, with canning planned to start in the spring.