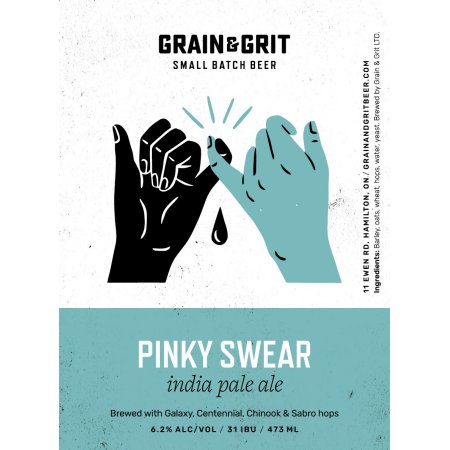 HAMILTON, ON – Grain & Grit Beer Co. has announced details of a new version of an IPA that was originally available late last year, this time featuring a brand new hop bill.

The new batch of Pinky Swear (6.2% abv) is described as follows:

This batch was aggressively hopped with Galaxy and Amarillo in the whirlpool and then dry hopped with local Centennial and Chinook from VQH Farms. We dry hopped it one more time with Sabro to round out this juicy, pithy and velvety IPA. You’ll get citrus and a touch of dank on the nose, with flavors of orange, mango and subtle coconut from the Sabro hops.

Pinky Swear will be released at the brewery tomorrow (January 17th) at 12:00 noon, with a launch party from 6:00 to 9:00 PM featuring a food pop-up from Pierogi Me.