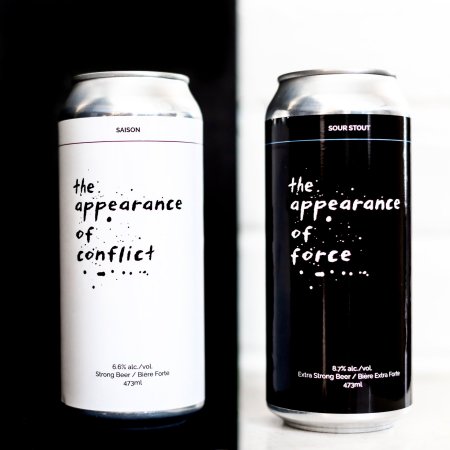 GRAVENHURST, ON – Sawdust City Brewing has announced the release of two new beers with names inspired by the lyrics of a classic Tragically Hip song.

The Appearance of Conflict (6.6% abv) is a brett saison with chamomile described as follows:

Fresh, sweet floral aromas of chamomile, spice and honey meet you on the nose. Layers of funk, spice and chamomile tea flavours immediately follow. The Appearance of Conflict is exceptionally dry with lively carbonation to make this farmhouse ale enticingly approachable and remarkably refreshing.

The Appearance of Force (8.7% abv) is a sour stout with the following notes:

Pouring pitch black over a light tan head, this long-awaited bourbon barrel-aged stout has aromas of tart cherry followed by a hint of oak, tobacco and leather. A tart acidity hits you on the first sip as flavours of roasted malt, cherry cola and amaretto come at you in waves. Layered and complex, The Appearance of Force develops as it warms into flavours of coffee, oats and bourbon.

Both beers will be released today (January 16th) at the Sawdust City retail shop and online store.