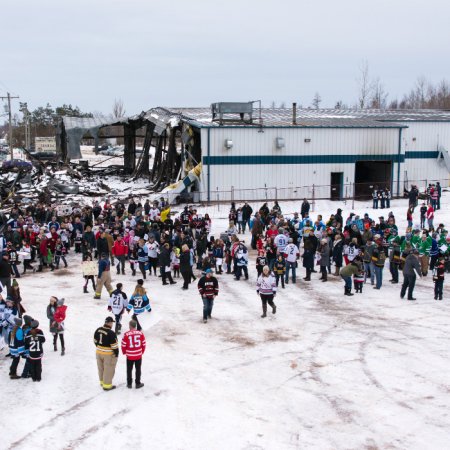 SAINT JOHN, NB & TYNE VALLEY, PE – Moosehead Breweries has announced that it will be donating a portion of sales of its beer in Prince Edward Island to held rebuild a hockey rink and community centre that was destroyed by fire last month.

The Tyne Valley Community Sports Centre burned down on December 29th, and insurance on the facility will not be sufficient to rebuild it, so the community has launched a GoFundMe campaign with an aim to raise $40,000 for the cause.

From January 20th to February 29th, $1 from every case of Moosehead beer sold at PEI Liquor Stores – up to a total of $20,000 – will be donated to the campaign

“We join the people of Tyne Valley in mourning this heartbreaking loss,” said Socke MacDonald, Moosehead’s PEI Territory Manager, in a statement. “The centre was more than a skating rink – it was home to countless community events and provided a real gathering place for people from Tyne Valley and beyond.”

For more details, see the full announcement on the Moosehead blog.