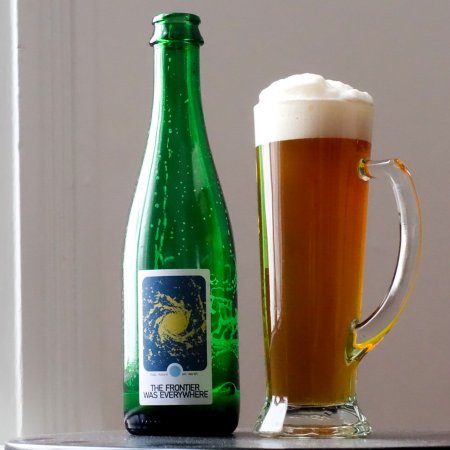 The Frontier Was Everywhere (5% abv) started out as a “simple amber lager”, but then underwent a radical transformation:

It was almost time for packaging when we had just received a fresh batch of wine barrels at the brewery, we could not resist. The entire little batch was transferred into a single Cabernet Sauvignon oak barrel along with a fresh new mixed culture of Brettanomyces & souring bacteria. It then aged for a full year while undergoing secondary fermentation in the barrel. After aging, we dry-hopped with East Kent Golding & Saaz hops prior to bottle conditioning. The secondary fermentation and oak aging turned this tasty refined lager into an intricately layered hybrid farmhouse sour/lager. The light malty sweetness is retained, with a tart and dry finish. Floral aromatics, with notes of caramel and orange rind, with a balanced spiciness from the dry-hopping. Red wine and oak are prevalent throughout, adding to the complexity. Clean, crisp, effervescent, and overall, just a great drinking beer.

The Frontier Was Everywhere is available now in 375 ml bottles at the Half Hours on Earth brewery store and online shop while supplies last.