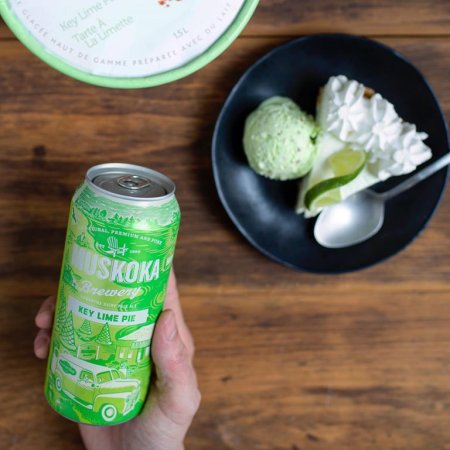 BRACEBRIDGE, ON – Muskoka Brewery has announced the release of its third annual winter seasonal beer inspired by an ice cream from local business Kawartha Dairy.

This year, these two cottage country pit stops worked together to create Key Lime Pie, a new ice cream for Kawartha and a new beer for Muskoka Brewery. Both teams spent hours finessing the elements of the graham cracker crust to make it a true pie-inspired treat. Key Lime Pie Pale Ale takes the best things about beer and combines it with everything you love about Key Lime Pie. With every sip indulge in notes of creamy key lime and sweet graham cracker. You’ll find these same flavours, but for all ages of course, in Kawartha’s new ice cream.

Key Lime Pie Pale Ale is available now in 473 ml cans at the Muskoka Brewery retail store, and select grocery stores and LCBO locations in Ontario. Key Lime Pie Ice Cream can be found where Kawartha Dairy products are sold. Both will be available for a limited time.