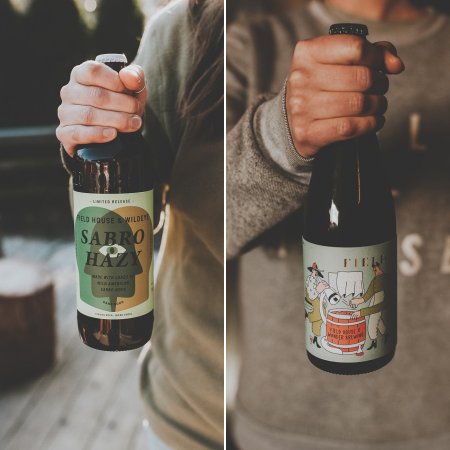 Sabro Hazy (6.5% abv) is a collaboration with North Vancouver’s Wildeye Brewing, and is described as a “unique new world style IPA that is double dry-hopped solely with Sabro, known for its tropical fruit and citrus notes with a hint of coconut.”

Spontaneous (6.3% abv) is the latest beer in the BRRL ROOM by Field House barrel-aged beer series, and was co-created by Wander Brewing of Bellingham, Washington. It has the following notes:

This Lambic-style ale was made just like the Belgian brewers did a century ago: Traditional turbid decoction mash, aged lambic hops and left in Wander’s coolship overnight where it collected wild East Abby souring bacteria and fermenting yeast. Matured for 18 months in French oak white wine barrels from Chaberton Estate Wineries before going through a second natural fermentation in bottles.

Both beers are released today at the Field House taproom, and will be available soon at select private liquor stores.