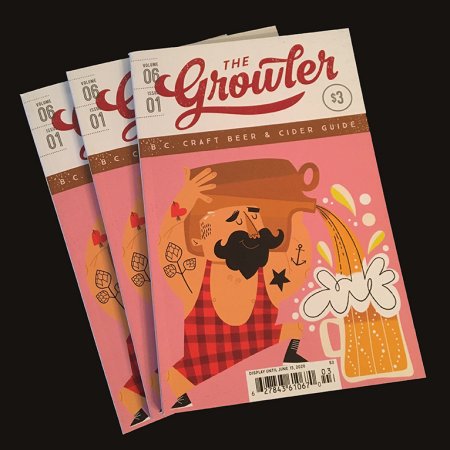 VANCOUVER, BC – The Spring 2020 issue of The Growler – a quarterly guide to British Columbia’s craft brewing scene – is now available.

In addition to listings and maps for more than 200 B.C. breweries, the magazine’s mandate has been expanded to cover the province’s growing craft cider industry:

Just as craft beer has exploded over the past decade, so too has cider. It seems British Columbians can’t get enough of delicious, locally produced craft beverages! One of the many things that makes B.C. cider so great is that it’s largely made with B.C. fruits, thus supporting local agriculture. And just as breweries have experimented with beer styles, so too have cideries, with offerings ranging from traditional dry ciders all the way to funky wild-fermented Basque-style sagardoa, and everything in between. There’s a good reason nearly every craft brewery tasting room in the province has at least one cider on tap, and now you’ll be able to discover all of B.C.’s cideries, all in one place.

Also featured is the usual assortment of “informative articles, entertaining features and interviews with the most interesting personalities in B.C. craft beer.”

The Growler Volume 6 Issue 1 is available now at breweries, cideries, liquor stores, taprooms, and other retail locations throughout British Columbia. It can also be purchased online individually or as part of an annual subscription, and select articles are available to read on the magazine’s website.