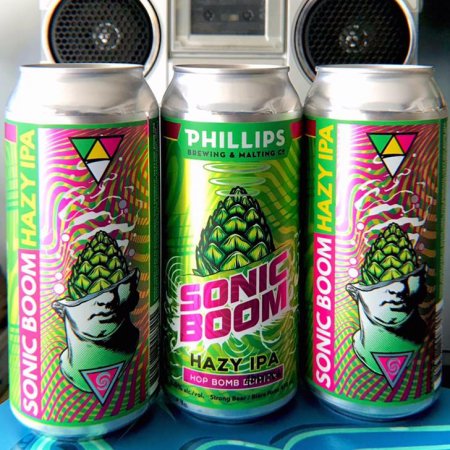 VICTORIA, BC – Phillips Brewing has announced the release of a new beer intended to “break the sound beerier”.

Sonic Boom was brewed using cutting edge ultrasonic technology during the dry-hopping process. Very high energy sound waves were used to create tiny bubbles that burst with incredible pressure (3000 Barr or 43000psi). This SONICation pressure accelerates hop aroma and flavour infusion proving that science can be both useful and delicious.

Known for their bright citrus and tropical qualities: Mosaic, Citra, Ahtanum Cyro and Azacca hops were all SONICated to create a pleasing blend of grapefruit, mango, papaya, pineapple, with a hint of pine and cedar. House-malted barley, combined with generous amounts of wheat, spelt and oats in the mash lend to a hazy pour with a creamy, pillowy-soft mouthfeel, and gentle bitterness that finishes smooth.

Sonic Boom is available now in 473 ml cans at select private liquor retailers in BC and at the Phillips retail store while supplies last.