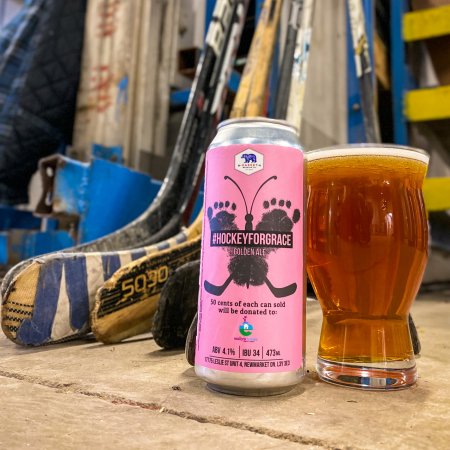 NEWMARKET, ON – Market Brewing has announced a limited edition release of one of its core beers that will raise money for a local charity.

Hockey For Grace Golden Ale (4.1% abv) is a specially labeled version of Leslie Crusher Golden Ale, which is described as follows:

A light and sessionable ale, not holding back on flavour or body. Malt driven with notes of honey and fresh baked bread, balanced by a firm supporting hop bitterness. Flavour and body abound, this beer will quench your thirst.

Hockey For Grace – or by its full name, The Grace Manning Memorial Hockey Tournament & Charity Social – is an annual event founded by Amy and Chris Manning in honour of their daughter, Grace, who was born prematurely and passed away soon afterward. The event raises money for Emily’s House, a hospice in Toronto for children with life-threatening illnesses and their families.

While this year’s edition of the tournament has been postponed for now due to COVID-19, various fundraising activities are still proceeding, including the beer release. It will be available for take-home purchase starting today at Market Brewing, with 50 cents from each can going to Emily’s House.