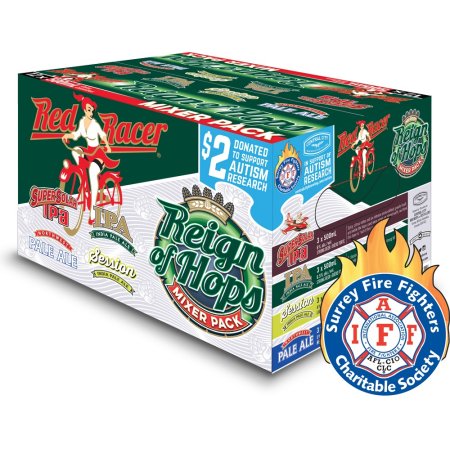 SURREY, BC – Central City Brewers has announced details of its 8th annual promotion for autism fundraising and awareness, with this year’s campaign being run in partnership with the Surrey Firefighters Charitable Society.

For the 2020 campaign, the brewery is releasing a specially labelled version of the Red Racer Reign of Hops Mixer Pack, which features three 500 ml cans each of Red Racer’s Session IPA, Northwest Pale Ale, IPA, and Super Solar IPA.

The limited edition Reign of Hops package will be available in April at retail outlets in British Columbia, Alberta, and Manitoba, with $2 per pack sold to be donated to autism research initiatives at Simon Fraser University.

For more details, see the Autism Program page on the Central City website.