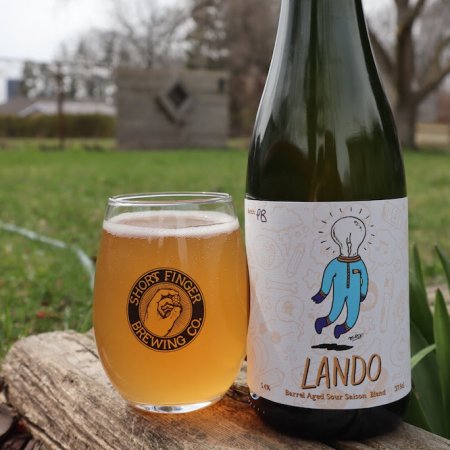 KITCHENER, ON – Short Finger Brewing has announced the release of three new beers.

Lando – Batch PB (5.4% abv) is the latest version of the brewery’s “ever-evolving sour Saison blend”. The “PB” stands of Puncheon Blush (or alternatively, Panic Buy), and the beer is described as follows:

This is a very light blend of Lando with only two components, as the base was excellent. 90% of this batch is Lando fermented with Zinfandel Blush and aged in fresh French Red Wine Puncheons. 10% fresh Lando was added to liven the batch up and it has now been conditioning in bottles for over 2 months. This batch offers a very pleasant grape and stone fruit addition to the base expression of Lando.

Danko IPA (6.5% abv) is a returning beer that was first available last year, although with a few tweaks for this new batch. Brewed with Simcoe hops, it’s described by brewer Rob Hern as being “closer to an East Coast than a West Coast IPA, but I don’t like to put unnecessary labels on things.”

Aliens Exist (5.8% abv) is a mixed fermentation pale ale, with the following notes:

To my memory, this is a blend of seven beers, which means it’ll be a moving target for any future versions. The blend includes two-second use dry hops from previous Pale Ales and dry-hopped sour blend stock. We aged it out a little longer than you would normally age any traditional Pale Ale, but let’s be clear: if you came to SFBC for traditional, you will be … disappointed. Once the blend was solidified, I added Berliner Brett 1 and 2 from Escarpment to the conditioning tank and let it age a little longer before packaging. It was kegged and conditioned originally, as it was intended to be a by-the-glass-only offering in our tasting room. Crazy times, so we bottled it. Pleasant funk, light acidity, and tropical fruit notes.

All three beers can be ordered now in the Short Finger online store, with direct delivery available in Waterloo Region, and shipping elsewhere in Ontario.