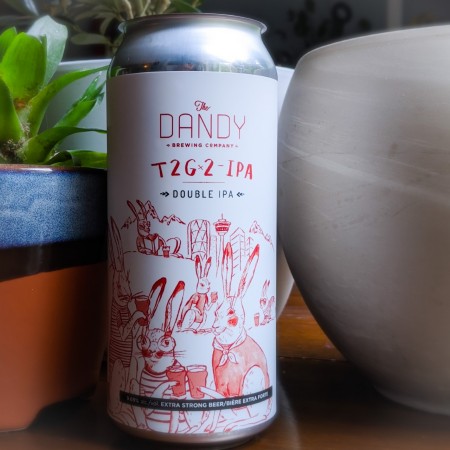 Rooted in the classic German style: straw yellow with a light crackery aroma, and restrained bitterness. It is brewed with 100% locally grown and malted Origin Pilsner malt. Expect an enticing lager, refreshingly clean and bright.

Neue Deutsche Welle is being released in collaboration with chefs Connie DeSousa and John Jackson of Charbar/Charcut, and will be sold at select locations as “Connie & John’s Beer” with partial proceeds going to their monthly charity program.

T2Gx2 IPA has the following notes:

A long overdue amped up iteration of our house IPA. Expect a much bolder experience. Huge aroma of mango and pineapple, bursting with tropical flavour on the palate. Still holding true to its core values of an IPA from “parts unknown”, it retains its focus on balance over everything else, with a mellow bitterness and a moderate to rich mouthfeel.

Both beers will be available on Wednesday May 27th in the Dandy retail store and online shop.

The launch will be celebrated with an online “Bringing Our Taproom to Your Living Room” event on Friday May 29th at 5:00 PM, featuring a guided tasting and Q&A with brewer Colin Baldner and co-founder Ben Leon. Tickets are available online for $40, which includes a mixed 4-pack of Dandy beers including the two new releases, a paired snack, tasting glass, and a 10% off coupon for a future growler purchase. Partial proceeds will go to support Huddle Up Suicide Prevention Calgary.