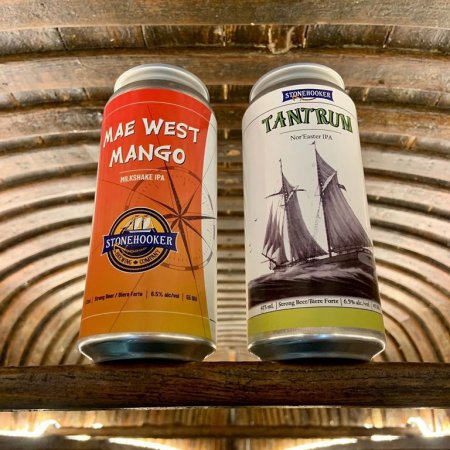 Mae West Mango Milkshake IPA (6.5% abv) is the latest in the Mae West series of fruit-flavoured milkshake IPAs, and is described as follows:

The Alphonso variety is known as the king of mangoes, the sweetest and juiciest of them all. Only the best for Mae West. Along with the mangoes, real vanilla beans chopped and soaked in vodka along with a solid dose of lactose make this a creamy and decadent brew.

Tantrum Nor’Easter IPA (6.5% abv) is the first in the new Transom Series which is dedicated to “exploring the wide horizons of IPAs”. It has the following notes:

A New England style IPA with a unique combination of hops. Honeydew melon and tropical fruit aromas abound, followed by pineapple and stone fruit on the tongue with a zesty finish.

Both beers are available now in the Stonehooker retail store and online shop while supplies last.