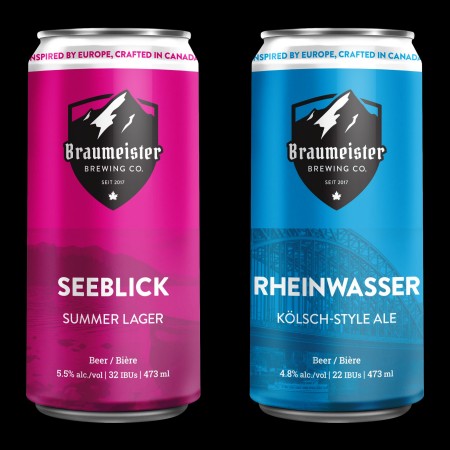 CARLETON PLACE, ON – Braumeister Brewing has announced the release of a new summer seasonal, as well as the third annual return of one of its original beers.

Seeblick Summer Lager (5.5% abv) is the new arrival, and is described as follows:

With two newer varieties of German hops and a clean malt bill, Seeblick gives off notes of berries, citrus, and tropical fruits. Golden in colour and with hints of summer fruit throughout the nose and pallette, this beer is made to be enjoyed out in the sunshine

Rheinwasser (4.8% abv) is a Kölsch-style ale that was available for a limited time when the brewery opened in 2018, and again last summer. It has the following notes:

A delicate, straw-coloured beer with a mild cereal-grain malt flavour and subdued hoppiness, our Kölsch-style ale finishes with a moderately dry finish. Fermented at slightly cooler temperatures than the average ale for a lager-like crispness.

Both beers will be released soon at the Braumeister retail store and online shop.