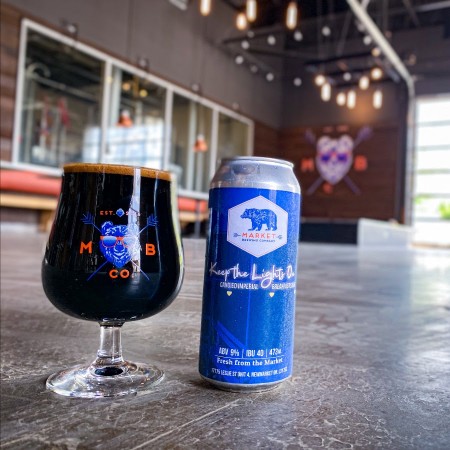 NEWMARKET, ON – Market Brewing has announced the release of a new limited edition beer to mark the brewery’s third anniversary.

Keep The Lights On Candied Imperial Breakfast Stout (9% abv) is described as follows:

We created a collaboration like none we’ve ever done before. We used Wickedly Sinful Food Truck’s proprietary beer candy technique that we originally tried in Andy’s Dandy Candied Brown Ale. We used Coffee Cake from Sweet B’s Bakery. We used Maple Syrup from Cooper’s CSA Farm to add depth and flavour. Because maple ferments so efficiently, we had Laos-C-Chef toast some Fenugreek Seed to add complexity to the maple flavour. After fermentation, we conditioned on freshly roasted Coffee Beans from My Indie Coffee. We used Escarpment Labs’ Hornindal Kveik Yeast, and used a new hop called Pahto from Brew Culture. We added Brown Sugar and Cinnamon Sticks for good measure.

This Imperial Stout was boiled for 3 hours, and was partially reboiled during the beer candy process. The result is rich dark chocolate, caramel, and toffee flavours coming through with a heavy malt body. Mild earthy hops balance the brown sugar and molasses sweetness. Coffee and roasted notes come through strong. A thick, delicious treat, to be enjoyed for dessert, by a campfire, or for breakfast, or whenever.

Keep The Lights On is available now in 473 ml cans at the Market Brewing retail store and online shop.