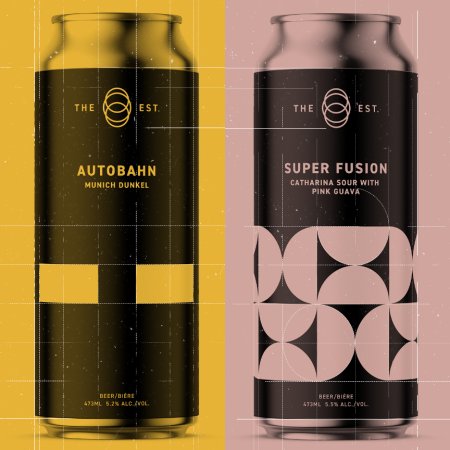 CALGARY, AB – The Establishment Brewing Company has announced the release of a new limited edition beer, as well as the return of an earlier favourite.

Autobahn Munich Dunkel (5.2% abv) makes its debut, and is described as follows:

It’s a real liquid feat of German-hop engineering. Made to be consumed in quantity, this malt masterpiece is quality comfort food you can drink. The amino acids and reducing sugars of this beer collide to impart some of the characteristics of your other favourite golden indulgences, like BBQ and biscuits. If Maillard’s not mistaken, this clutch release is going to cause a real chemical reaction. With notes of roasty, toasty bread crust, this beer is the hearty manifestation of surprisingly delicate brewing techniques. Sandwich yourself somewhere comfy and drink deep of this dark lager.

Super Fusion Catharina Sour (5.5% abv) is back again, and has the following notes:

Remember that microbatch pink guava kettle sour we had on tap for a very short time? The one that we later made available in cans for a slightly longer time? Well, every time, Super Fusion’s absence makes our hearts grow fonder, so we brewed another batch. As a refresher, this beer is a Catharina Sour: a style born when the ingenuity of craft beer met the warm embrace of seasoned brewers – what a tropically fruitful marriage. It tastes kinda like a typical Berliner Weisse took a spa vacation to the islands and came back re-fermented and perkier than ever.

Both beers are available now in 473 ml cans at the Establishment retail shop and online store.