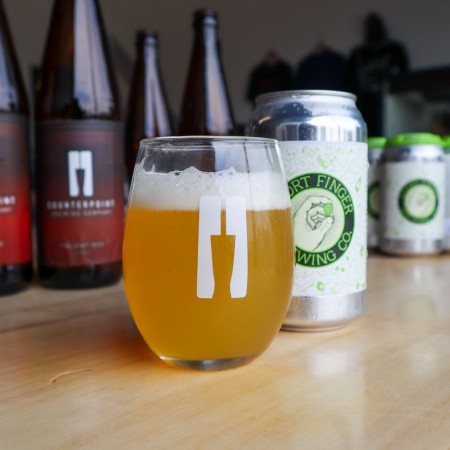 KITCHENER, ON – Counterpoint Brewing and Short Finger Brewing have announced the release of a new pair of collaborative IPAs.

Ohh Lala (6.8% abv) and Ahh OuiOui (7.2% abv) have been released by Counterpoint and Short Finger respectively, and had a unique development process:

There were plenty of emails and phone calls involved, along with a glorious Zoom chat. We made the same beer… kind of. But also kind of not. The idea was that we’d start with the same base recipe, but add a twist to make it our own… with the added twist that the resulting brews are meant to be blended by the drinker. Honestly, it was a pretty fun way to manage a collab during a pandemic.

Ohh Lala is a Turmeric IPA dry-hopped with Centennial, Citra and Comet, while Ahh OuiOui is a Mixed Fermentation IPA with Grapefruit. As noted above, both beers can be enjoyed on their own, but can also be blended to create “a knockout, hoppy Counterpoint classic with a subtle, funky tart note from the madhouse that is SFBC.”

Ohh Lala is available now at the Counterpoint retail store and online shop, and Ahh OuiOui is at Short Finger for both in-person and online purchase, while supplies last.